3 dedicated helipads
Abbotts Airport, formerly Abbotts Aerodrome, (ICAO: SLAZ) is a historic public airport in the 'Abbotts' region of Second Life's oldest continent, Sansara. Since being sold by founder Cubey Terra in 2011, the airport has had several owners, including the late Blacktip Razor. It is presently owned by Sofia Sharkfin (sophie.sharkfin) who is a member of the Second Life Coast Guard. It is home to Second Life Coast Guard Station Abbotts Field.

Abbotts Aerodrome was founded in January 2004 by Apotheus Silverman and Cubey Terra. Their second attempt at building an airport (the first being Zoe Airfield in late 2003), the original concept behind the Aerodrome was a multi-level, art deco, futuristic airport which floated over the ruins of an abandoned airfield. To complete the effect, there was a dilapidated hangar, tower, and a couple of wrecked biplanes. The build originally consisted of separate plots of land consisting of about 24,000 square meters. Over the years that followed, the Aerodrome expanded to occupy most of the available land in the Abbotts region.

Automated flights left the Aerodrome runway several times per hour and flew on regular routes all over the mainland (the current continent of Sansara). The AI planes used on the route consisted of a light civilian monoplane, a L-18 Lodestar, and a Boeing 737.

Between September 2004 and Autumn 2005, further changes were made to the build including the addition of a central lobby/terminal building adjacent to the Terrabucks coffeehouse, and new aircraft sandbox was placed at the northeast corner of Abbotts. The small independent hangars were eventually combined into one large hangar with dividers between the three shops and Terra replaced his small two story shop with a new multi-level store.

After briefly stepping down from management of the Aerodrome in September 2005, Cubey Terra began a series of design revisions in March of 2006. Resulting in the complete destruction and rebuilding of Abbotts Aerodrome, the new build consisted of several compact buildings that clung to the hillside.

At ground level the runway was rebuilt, with a large hangar and a new passenger terminal. The central building, which contained offices, Apotheus Silverman's shop, and Terrabucks Coffee, was on the hill and fronted by a plaza and a fountain made from an old Linden telehub. Other buildings included a skydiving center, Arrekusu Muromachi's shop, Chage McCoy's shop, Cubey Terra's shop, and Reitsuki Kojima's workspace. On the east side, on the top of the ridge, Terra constructed a heliport with several landing pads and Jillian Callahan's shop.

In October of 2006, several months after being re-designed as hillside terraces, the Aerodrome went through another major construction phase. The runway from the March 2006 rebuild was left in place, however individual shops, offices, Terrabucks, and the ground level terminal were eliminated in favor of a gigantic tower design with multiple floors.

The three main floors included a dedicated telehub level, a main level containing the aerodrome's central shopping mall (and Terrabucks coffeehouse), and a terminal level which was, unlike previous builds, raised above the ground level with two lifts descending to the tarmac and runway below. The west lift extended further down into the submarine dock below the surface.

In addition, four outstretched arms extended from the main level of the tower building: the north and west arms held skydiving lifts and targets, the south point had an automated airship dock, and the east point was used as a helipad.

On 2nd August 2011, Cubey Terra announced that Abbotts Aerodrome was closing on 1st September 2011.[1] The sim was briefly purchased by Cheshyr Pontchartrain of Novatech on 29 August 2011.

After passing through several owners in quick succession, Abbotts was purchased by Blacktip Razor. Attempting to restore Abbotts to its former glory after several years of neglect, a major redevelopment followed, prompted in part by the decision to return many of the old buildings which had become uncontrollable due to the number of previous owners.

Abbotts Airport is designed with an art deco theme. The control tower is located adjacent to the main runway. Fuel services are available at the eastern end of the runway from Texaco (DSA) and Terra Fuel pumps. After landing, pilots are free to take the metal stairs down to the water and follow the beautifully paved path along the perimeter.

After the passing of Blacktip Razor, the airport was taken over by Patrick and Delight Leavitt and Max Boost, who worked to maintain his legacy.

Debi Dastardly, the owner of all Smugglers Airports, purchased the airport on June 24th, 2018. The art deco design built by Sam Portocarrero has been kept, but the inside of the Terminal has been redecorated with help of Debi's sister, Emery (exodusgirl Resident). The legacy that Cubey Terra created, and Blacktip Razor preserved, has been kept. In September 2018, Sofia Sharkfin purchased Abbotts from Debi with the intent to continue to maintain its historical legacy.

The following list includes all scheduled services to and from Abbotts Aerodrome/Abbotts Airport as of September 2015. Other non-scheduled charter flights may be available on request. Please contact airlines for more information. 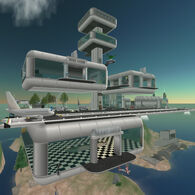 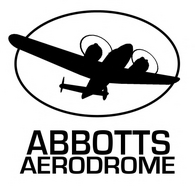