Facility constructed by the Linden Department of Public Works for Bay City. The design was chosen by Residents of Bay City and reflects an airport of the 1930s-1940s. As such, this airport lacks many of the modern conveniences that might put it in line with a "jet age" field.

Airship Dock allows for rez with taxiway to main airport hangar. Just north of the main plaza is the Municipal Airport. Runway is lit but without markings. Large rez area located at the far West of runway. Bay City runway 9 is 250 m long, at 4.3 m ASL.

This location is a "new resident Info Hub." Check for excessive avatars via the Viewer Map before flying to this destination. Fuel pumps near primary hangar dispense Terra and Saunders Aviation fuel from the signs above them.

A free pair of "Bay City Municipal Airport" overalls can be found in the main hangar. Therre are other free items, including luggage in the terminal.

An inworld group, "Bay City ATC " founded by Michael Linden, is in use for Air-to-air and air-to-ground channel for the Bay City Municipal Airport.

The following list includes all scheduled services to and from Bay City Municipal Airport, as of September 2015. Other non-scheduled charter flights may be available on request. Please contact airlines for more information. 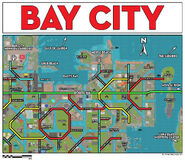 Bay City Municipal Airport in relation to the city (March 2010).