Bentwaters Field (ICAO: SLBF) - was a large public airport in the 'Courage' region of eastern Nautilus. Bentwaters Field is the home of the semi-annual Winterhawk Cup Air Race.

Bentwaters Field is a large, region-sized airport named after the real-life RAF Bentwaters, now known as Bentwaters Parks, a former Royal Air Force station about 80 miles (130 km) northeast of London. Originally equipped with a single long runway, the airport had a second asphalt surface added in early 2014. By mid 2014 further alterations were made to the airport's layout, most notably the addition of a new terminal building between the two runways. A modestly sized building, the terminal contains the airport's ATC tower, rental offices and airline check-in counters.

Though much of the airport's central area has undergone immense change since its inception, the east and west edges of the facility have remained largely unchanged; lined as they are with rows of spacious rental hangars. The DSA-standard refuelling station, which was previously located in the middle of the facility, now sits at the south-western corner of the platform. Below the airport platform is a functional marina and dedicated fire/rescue, and police departments.

The following list includes all scheduled services to and from Bentwaters Field, as of November 2015. Other non-scheduled charter flights may be available on request. Please contact airlines for more information. 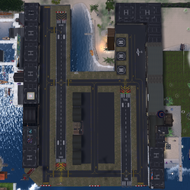 Bentwaters
Add a photo to this gallery
Retrieved from "https://sl-aviation.fandom.com/wiki/Bentwaters_Field?oldid=22509"
Community content is available under CC-BY-SA unless otherwise noted.