Construction on the facilities ground to a halt in mid-2014 and the build was disassembled.

Originally part of a project based in the 'Indigo' region of Sansara, construction of the first Air Tennessee Airport ceased in early 2014 and moved to join Claremont Intercontinental in the 'Bottenford' sim. Air Tennessee was a skyport located 500 meters above sea-level. It featured two large runways similar to its sister airport below. A serpentine internal monorail system linked the two platforms and a marina, similar to Claremont International Airport, was built below the Claremont International platform.

After a short existence, construction ground to a halt in mid-2014 and the build was disassembled; as were other properties owned by Roger Claremont at this time.

There are no longer scheduled services to and from Claremont Intercontinental & Air Tennessee Airports, as of November 2014. 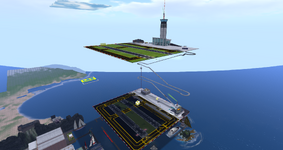 Claremont Intercontinental (below) and Air Tennessee (above), looking north-east (April 2014). 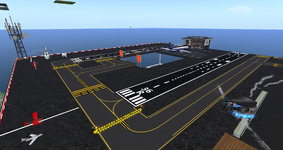