This article is about East River Intercontinental Airport. For the municipal airport in 'Munck' and 'Brooks', see East River Municipal Airport.

Constructed in late Spring 2014, East River Intercontinental is the second of two airports built to serve the residents and visitors of East River Community, an incorporated area near the core of the Sansara continent. The area features beautiful homes and villas along the twisting river complete with many services, galleries and other places to explore.

A massive, multi-leveled terminal spans the northern edge of the complex, with several arrival/departure gates and a dedicated gate A4 linking the airport with White Star Airfield on Nautilus via an airline ticket HUD and teleporter. The terminal is equipped with three jet bridges, lounges, monorail terminal, restaurants, ticket counters, and baggage reclaim.

In the centre of the 'Blackslough' region is a single, large runway capable of handling aircraft of almost any size, and several large hangar structures line the remaining edges of the facility.

In August 2015, the heliport at the NW corner of the field was deactivated and torn up, along with heliport terminal gates H1 and H2, to make room for a new fire and rescue station as well as improved airfield access and various administration functions including a new ATC tower housing the airport's resident ATC Bot.

In early October 2015, due to underutilization, the GA apron was closed and a new 4-bay ARFF facility was built on that site, replacing the smaller interim structure at the NW corner of the field. This activity coincides with significant construction and renovation work on the main concourse of the terminal, which is expected to be complete within a month but will not impact airside activities. Later in 2015 the ARFF relocated to the former site of Hangar 4 and the SW apron was given entirely over to cargo operations, with a cargo terminal under construction as of February 2016.

Also in early October 2015 the East River Borough appointed Fey Twin to the role of Airport Manager, permitting Volchia Ferduccio to focus more on Borough business at large (while remaining the titular owner of ERIA) and realigning Elisha Paklena to the role of Airport Facilities Engineer. To date this management appointment has brought one airline tenant to the field and opened up more possibilities for roleplay; future activities and opportunities are doubtless forthcoming at some point in the future.

In February 2016 the majority phase of terminal renovation was complete, with a complete overhaul of the main terminal and the construction of a South Satellite terminal between hangar 5 and the Unity hangar, incorporating the latter as gate S3. The satellite is connected to the main terminal by an underground tram.

In 2017, de facto ownership of operations reverted entirely back to Chia Ferduccio and Elisha Paklena,

In August 2018 the entire airfield was repaved and relined, and construction begun on a new air cargo terminal at the SE corner of the field in Pippen to be physically closer to a Borough dock renovation project. To facilitate this, the former rescue services and Unity hangars were demolished and the access roads reconfigured.

The following list includes all scheduled services to and from East River Intercontinental Airport, as of September 2018. Other non-scheduled charter flights may be available on request. Please contact airlines for more information.

Gate A4 departing for Desdemona Airfield via teleport (August 2014). 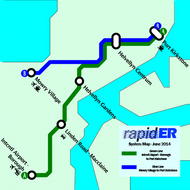 Schematic map of the rapidER transit system (June 2014).
Add a photo to this gallery

Retrieved from "https://sl-aviation.fandom.com/wiki/East_River_Intercontinental_Airport?oldid=32629"
Community content is available under CC-BY-SA unless otherwise noted.