The MD Helicopters MD-500 (ICAO: H500 / WAKE: LIGHT) is a light utility civilian and military helicopter. Created in Second Life by Spijkers & Wingtips, the helicopter was based on the real-life Hughes 500 initially produced by Hughes Helicopters (now MD Helicopters).

The real-life Hughes 500 (which both Spijkers & Wingtips and Apolon Motors' models have been designed to resemble) was developed as a civilian version of the US Army's OH-6A Cayuse/Loach. The 500 series features shock-absorbing landing skid struts, a turboshaft engine mounted at a 45-degree angle toward the rear of the cabin pod, a fuel tank cell under the floor and the battery in the nose. The engine exhaust port is located at the end of the cabin pod underneath the tail boom. It has a short-diameter main rotor system and a short tail, giving it an agile control response and is less susceptible to weather-cocking.

Originally released as a sculpted-prim helicopter based on the MD-500D, the latest iteration of Spijkers & Wingtips's MD-500 is a mesh model based on the earlier Hughes 500. The helicopter is equipped with realistic lighting (navigation lights, strobes, beacon and front-facing search light), optional floats and siren. Although not necessary for flight, the mesh MD-500 also comes with a standard S&W pilot's heads-up display (HUD). Like all S&W helicopters, the aircraft uses an incremental collective/cyclic flight system and is fully modifiable, with independent vendors developing additional equipment and liveries for the helicopter.

First takeoff from Half Hicht with my own designed costume, FFK-ensign(VFC) Supergirl and my callsign SE-HAL 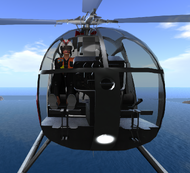 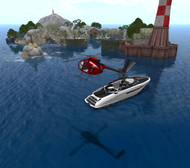 Retrieved from "https://sl-aviation.fandom.com/wiki/MD-500_(S%26W)?oldid=16686"
Community content is available under CC-BY-SA unless otherwise noted.