The Black Bird Airport (ICAO: SLBB) was a public, free-floating airport located 400m above the 'Delchdork' region of eastern Nautilus. It has since been replaced by Delchdork Airport.

The Black Bird Airport was a large dual runway skyport located at 400 meters. It hosted parking for several fixed wing and rotary aircraft. Texaco fuel services were available at the north-west end of the complex. On the south-west end of the complex there was a terminal building and facilities belonging to the Black Bird Flight School. Adjacent to these were several hangers rented by other groups that also offer training. The facility ceased operating in late April/early May 2014 and was replaced by Delchdork Airport.

At its height, there were no scheduled services operating to or from Black Bird Airport, however charter flights may have been available on request. 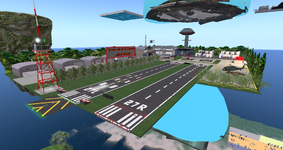